This post will offer some thoughts on the use of psychotropic medications for children and youth with complex trauma histories.  In a previous post, Complex Trauma and Assessment {https://www.complextrauma.ca/complex-trauma-assessment/ }, I wrote about a young boy named David and how typical psychiatric assessment processes resulted in him receiving seven different diagnoses to describe the variety of emotional and behavioural challenges he was exhibiting.  Our premise is that this assessment and diagnostic process ignores the trauma which is the foundation of David’s difficulties.

Let’s look at one of the troubling outcomes of this typical assessment and diagnosis – namely the use of psychotropic medications.  I need to state that I am not a medical doctor and am not an expert in medications.  I am simply offering my observations from hundreds of cases.

Our boy David is typical of many boys and girls cared for in our foster care system.  David’s behaviour as a young boy was viewed as “out of control.” He could be aggressive, demanding, quickly lose his temper and have emotional “meltdowns.”  In school he was viewed as impulsive and distractible. From an early age David was placed on stimulant medications by his pediatrician under the assumption that this behaviour represented ADHD. When his behaviour didn’t improve, different stimulants (e.g. Ritalin, Dexedrine, Concerta) were tried, with the dosages gradually being moved upwards to the maximum allowable.  When the foster parent began to describe an increase in David’s anxious symptoms and how his meltdowns were increasing, the pediatrician added an SSRI – Fluoxetine, to help with his anxiety.  Unfortunately, David’s difficult behaviour continued to get worse.  As he got bigger, his aggressiveness became very concerning and he had hurt his foster mother and another boy.  David was referred to a child psychiatrist.  The psychiatrist continued with the existing stimulant and SSRI and added an antipsychotic, Respiridol. 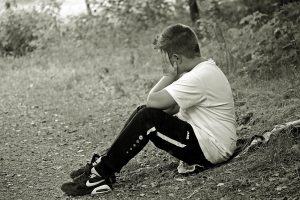 At this point we have a 10 year old boy who is on three powerful psychotropic medications with little or no improvement in his “symptoms.”  His seven diagnoses seem to suggest that this medication regime might be proper.  However, diagnosis offers little understanding of why David is demonstrating these various symptoms.  We also have little understanding of how these medications interact in David, or what side effects they might be causing.

The prescription pattern that I have described here is common in British Columbia for children in foster care who have been referred to our program.  Canadian research evidence would suggest that the pattern of increasing prescriptions varies slightly between boys and girls.  This is because the boys’ problems are generally seen as being “behavioural” in nature where a girl’s problems are often viewed as being “emotional.” Boys receive their first stimulant prescriptions at an earlier age and girls are more likely to receive an anti-depressant.  When antipsychotics are added, my own observation is that boys are often started on Respiridol to help with explosiveness, while girls with the same profile are started on Seroquel which is purported to help more with extreme mood issues.

Antipsychotics and children.  Stimulants and medications to help with anxiety or depression are approved, and can be effective for children.  However, let’s be clear.  Antipsychotic medications (e.g. Respiridol, Seroquel, Abilify) have only been tested and approved for use in older teens and adults who are presenting with diagnoses of psychosis or severe bi-polar mood disorder.  They are not approved for use with children under the age of 16.  When prescribed, they are being given “off-label,” meaning that this is not their intended use and certainly not their intended patient population.  I am not aware of any long-term studies on the effects of antipsychotics and how they affect the child’s developing brain, other than some evidence that certain symptoms may improve in the short run.

These are powerful medications with many possible side effects. There is strong research evidence that antipsychotics often result in extreme weight gain, can cause tics, can cause health risks through rising cholesterol and may contribute to the development of diabetes.  The weight gain itself is terrible for children as it results in social shame and affects their self-esteem. I have heard that these risks are higher for Aboriginal youth.  When these risks are questioned the explanation for their use is usually that the immediate benefits are thought to outweigh the long term risks.

In the U.S. there is a strong movement to better protect children in foster care when it comes to prescription of these medications.  This movement arises from an increasing understanding of how complex trauma affects brain development.

I have mentioned in earlier posts the importance of the idea that “our understanding drives our intervention.”  A trauma-informed perspective changes both how we view assessment and diagnosis, but it also might dramatically change how we approach medication.

If the major issue for these kids is physiological hyperarousal leading to dysregulated emotions and behaviour, then it is fair to examine any medication regime with this in mind.  ADHD meds are typically stimulants – e.g. Ritalin, Concerta, Dexedrine, Vyvanse.  My worry is that these stimulants may also increase the overall physiological arousal which may actually make the kids more anxious and hyper-alert.  If our main concern is the hyperarousal, then medications which target this may be more effective.  For example, clonidine and guanfacine (Intuiniv) are hypertensive medications which appear to quiet this stress response system.  Following the example in Dr. Bruce Perry’s writings, we have encouraged these meds for kids who appear to be hyperactive and out of control.  In many cases we’ve seen a dramatic improvement.  As one foster mom told me – “He is just so much calmer and he seems to be able to think a bit before he acts.  He’s not revved up and twitchy all the time like he was before.”

One pattern I’ve seen recently is that when ADHD meds don’t help or make things worse, the child is now often prescribed clonidine or Intuniv along with the stimulants.  Might this not be like going through the day with one foot on the gas and one foot on the brake?

Perhaps it is time to re-think our underlying assumptions when it comes to medication and to apply a trauma-informed lens to assessment, diagnosis and the use of psychotropic medication.  Even better, let’s apply proven trauma-informed interventions instead of starting with medication.